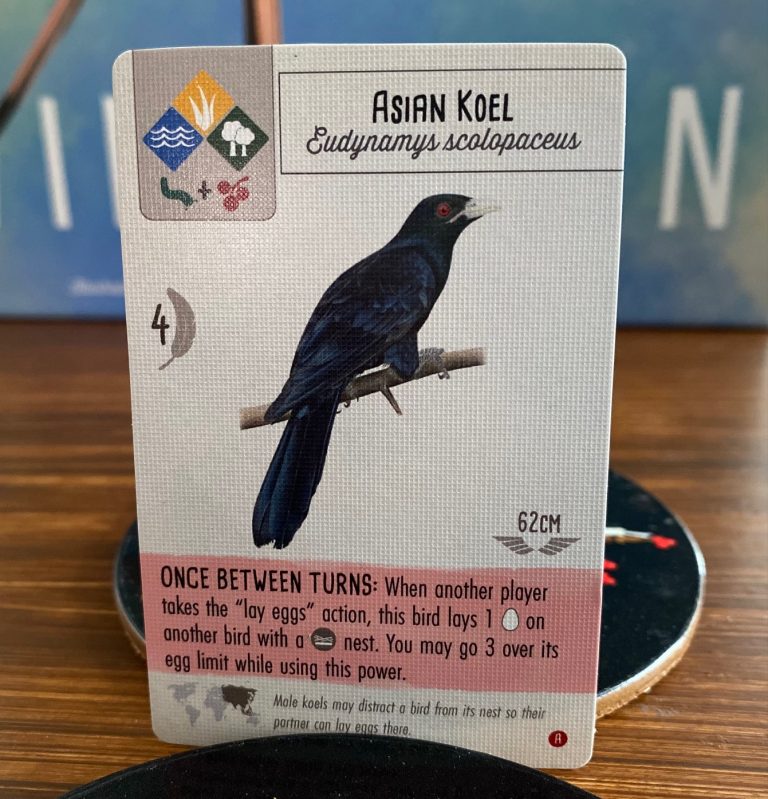 Asian Koel is a pretty great card. It can be played in any habitat and has a reasonable food cost. Like other parasitic nesters that have come before it, it doesn’t have its own nest, but it makes up for that by breaking the normal rules of Wingspan (a hallmark of top tier cards). When using its power, you can lay up to three more eggs on a platform nest than it can normally hold!

For Example, this means that a Bonelli’s Eagle could hold four total eggs instead of its normal one when those last three eggs are being laid by the Asian Koel. I never predicted we would see this type of power! Its a pretty exciting prospect for Wingspan.

Its ability to go in any habitat makes it a great body to drop into your Forest or Wetlands to jumpstart those habitats, as food and cards are pretty important in the earliest stages of the game. Asian Koel goes a long way to helping you ignore the Lay Eggs action in those earliest turns, as long as you have one platform nest to pair it with. Any bird with a two egg platform nest can hold five eggs when paired with the Koel. This is of course dependent on how often your opponent’s are laying eggs.

Rose-Ringed Parakeet is another great card. I predicted that we would one day see a power that repeated an opponent’s white power but this one has an interesting twist. It uses the word “neighbor” and this suggests that it looks at the player to your left and to your right. “Neighbor” is probably a short hand keyword.

Update: It has been confirmed by Stonemaier Games that “neighbor” refers to the players to your left and right.

It should also be noted that this power actually copies another power. Like Tui and Superb Lyrebird before it, this allows you to perfectly duplicate a cards literal text. This means that if you play Rose-Ringed Parakeet in your Grasslands, you could copy your neighbor’s Tufted Titmouse to then play another bird into your Forest. This can be an amazing early game accelerator if the right white powers are present.

This Parakeet has a cheap and flexible food cost which is great. Its not going to win any awards for its two points or two egg cavity nest though, but that’s fine with how powerful this bird’s ability to copy can be. The better that white powers get, the better Rose-Ringed Parakeet gets.